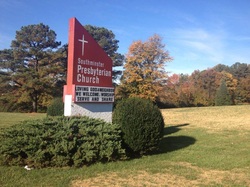 ​​Presbyterians were active in Manchester and adjacent areas of Chesterfield County, Virginia at least as early as 1812.  These records indicate that outposts and chapels were available for worship services south of the James River but that church membership was retained and recorded in the Presbyterian churches north of the James in Richmond, Virginia.

On June 3, 1870 an outpost, sponsored primarily by the First Presbyterian Church of Richmond, laid the cornerstone for a modest one room building at 10th and Porter Streets, Manchester, Virginia.  Shortly thereafter the congregation petitioned East Hanover Presbytery that they be officially organized as a church.  On November 21, 1870 the commission completed the organization of the new church,  named The First Presbyterian Church of Manchester, Virginia.  On May 19, 1871, the Reverend William A. Campbell was installed as the pastor of the church.

On June 5, 1966, in anticipation of constructing a new sanctuary at 7500 Hull Street Road in Chesterfield County, the congregation moved into temporary quarters at the Manchester High School, now Manchester Middle School.  By congregational action and approved by Hanover Presbytery, the name of the church was officially changed as of that date to Southminster Presbyterian Church.  On Palm Sunday, April 7, 1968, the first service was held in the present sanctuary.  The Dedication Service was held Sunday, May 5, 1968.

In 1981 a children’s education wing was completed and another building addition in 1989 added a new fellowship hall.

With over 150 years of dedicated service and a committed discipleship, Southminster Church continues to serve Christ’s kingdom.